What began as a cultural immersion during the summer of my 16th year, living with a family in Bombay as an exchange student, ballooned into a life-long quest with each plateau reached revealing yet another peak to climb.  In The Times of India, journalist Vinod Advani was prescient, titling his 1997 profile ‘Climbing a Mountain Called India’.  That article detailed the 17-city tour of India with my production, ‘Songs of Tagore’ breathing new life into the songs of Nobel Laureate Rabindranath Tagore.  Jincy Verghese, also in The Times of India, added that “as this finely-tuned dance group continues their Indian tour, they might inspire others, as they did us, to reopen the yellowing pages of the poet’s books with new-found enthusiasm.”

Having just completed the 10th tour of India by Battery Dance and preparing for what will be the 28th year in which we have presented Indian dance in New York, there is much to savor in the India-U.S. bridge-building enterprise and many layers to unpeel in doing so.  By bringing Tagore to India, my choreography had held up a mirror to India, asking younger generation Indians to appreciate the Bard of Bengal as I had done.

This year on a very different scale, I wanted to show Indian audiences a younger generation Indian dancer in his classical genre before they saw him melding with my own dancers in the cross-cultural work SHAKTI:  A Return to the Source.  Unnath Hassan Rathnaraju presented a Bharatanatyam solo on our program revealing his technical virtuosity but what’s more, in a touching vignette in which an alligator attacks the back leg of an elephant, he displayed his ability as a storyteller without the benefit of words.  His eyes and movements telegraphed the meaning of the story such that anyone, child or adult, could follow the narrative and empathize with the poor elephant (until Vishnu appeared and settled the tug of war.).

‘Unnath’s stage presence, his silhouettes set against the white backdrop and lucid expressions enhanced the presentation’, Bhanu Kumar, The Hindu.

This mimetic skill is something that the best Indian dancers have mastered – I saw Bijayini Satyapathy do so earlier this year in New York – but contemporary American dancers have no reference whatsoever in their practice.

Thus it was interesting to follow Unnath’s solo with Tadej Brdnik’s The Red Line, a work that has no literal, textual meaning but which packs a theatrical punch.  My hope was that Indian audiences would free themselves of the pressure to explicate the work and instead, let their imaginations be provoked by the choreography and the haunting score by Syrian-American composer Kinan Azmeh that provides the heartbeat and spell-binding intrigue that infuses it.  Apparently this worked.  Bhanu Kumar wrote in her review in The Hindu, ‘The seamless steps of the dancers, gliding and pacing with the long red fabric flowing, trailing and folding, underscored that art indeed knows no boundaries. The spacious stage became a creative canvas with the dancers using their bodies to paint fascinating and appealing configurations.’ 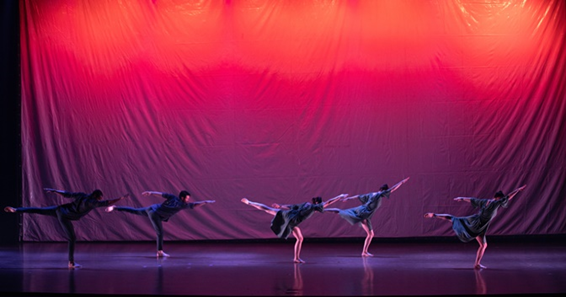